When asked how their experience with the Simply Eloped team was Katie said, " I loved the Simply Eloped team and had immediate confidence with them after the first email. They answered my many questions with great timing and grace. The photos turned out better than we could have imagined. As a bride, I can say I never felt so beautiful. Matthew is Katie's rock and Katie is Matthew's best friend. There's no denying how honest and sweet their love for each other is.

We at Simply Eloped feel so grateful to be in the business of love. It keeps us all afloat. Thank you for letting us be a part of your love story! We wish you the very best! All images minus last one credited to Austin Drawhorn of Simply Eloped.

First Name:. Last Name:. Here was a highway built to serve as a perfect introduction to the Rocky Mountains, a "scenic wonder road of the world" as the Rocky Mountain News termed it. Yet at the same time no part of the road exceeded a grade steeper than 7 percent.

The Estes Park Trail reported that "many cars make the trip from the village to the 'top' without changing gears. Constructing this new highway through the heart of a national park brought very few complaints. Voicing one note of concern, landscape architect Charles Eliot argued: "It is much better to build no roads than to run the risk of destroying wilderness areas.


For contrary to Eliot's view, advocates of Trail Ridge road pointed to the simple fact that it replaced the older, more hazardous Fall River route. Any destruction of wilderness could be blamed on the earlier road crossing the mountains, initiated prior to the Park being "preserved. The National Park Service believed it was responding correctly to a public need. All these roads provided easier automobile access to national park interiors and all were conceived during this same flurry of development activity.

Road construction of this type, Park Service Director Albright believed, "is meeting an obligation to the great mass of people who because of age, physical condition, or other reason would never have an opportunity to enjoy, close at hand, this marvelous mountain park. Careful supervision by W. Lafferty, district engineer for the Bureau of Public Roads, and continuous inspection by Superintendent Rogers helped maintain aesthetic sensitivity. When outcroppings at the Rock Cut had to be blasted with dynamite, for example, care was taken to guard neighboring rock pillars to prevent noticeable scarring.

Based on his recommendations, the road followed the most scenic route possible, including the dramatic Rock Cut area. But no single individual could have built this "million dollar road. Historian Musselman concluded simply that the "Trail Ridge project was a triumph of human ingenuity and perseverance. The immediate impact of opening Trail Ridge Road was far from philosophical. On a purely economic level, a project of such magnitude kept many people from Estes Park, Grand Lake, and other nearby communities employed while other parts of the nation began to suffer the effects of the Depression.

In addition to producing jobs, the new highway attracted more tourists. While other national parks watched their annual tide of vacationers dwindle by 25 percent or more during the s, Rocky Mountain's figures kept increasing. In , an estimated , people entered the Park, and by , with Trail Ridge Road fully opened, the number increased to nearly , Economic ills could not compete with a spectacular new highway as those travelers arrived in 83, automobiles. By , the number of people entering the Park climbed to nearly ,, bringing with them some , cars. Whether these travelers stayed only briefly or took the time "to rest and play" as expected by national park idealists appeared to be unimportant as National Park Service officials reveled in those numbers and local businesses reaped a harvest of tourist dollars.

The annual display of those growing statistics allowed Park officials to link their concept of progress through construction to the economic well-being of the local communities. Whether fulfilling national park ideals or not, this section of the Rockies remained closely tied to the entrepreneurial environment of Estes Park and Grand Lake, just as it had during the era preceding the Park's formation. Superintendent David Canfield summarized this mood in During the decade preceding Canfield's hopeful report, occasional differences arose with local residents as Park officials promoted a wilder environment for the Park.

Along the Park's eastern boundary, in particular, dozens of parcels of private property, many sporting summer cabins, served as an encroaching display of civilization for visitors expecting to see wilderness. Creating an appropriate entrance and environment for the Park meant acquiring private property. Much of Horseshoe Park, Beaver Meadows, and neighboring Moraine Park were occupied by ranches and resorts, this land having been homesteaded prior to the Park's formation.

At Director Albright's urging, the National Park Service started a lengthy program of land acquisition. Their intention was to insure that anyone driving the new Trail Ridge Road would behold scenery "free from unsightly and cluttered up structures. Removing every trace of old buildings, many in ramshakle condition, took even longer. An additional concern about the number of businesses sprouting at the very edge of the Park brought statements of cautious admonition, with National Park Service spokesmen gingerly sidestepping any interference with the legal rights of property owners.

In a guarded statement, Director Albright suggested that "the establishment of hot dog stands and billboards is frowned upon but there is no reason why the service should seek to curtail legitimate business enterprises. Protecting the Park's periphery included more than just decrying billboards and hot dog stands. Officials faced a more dramatic problem in poaching. Guarding the Park's wildlife kept rangers busy throughout the s.

Pursuing poachers became an annual challenge, especially when the local hunting season was in full swing and hunters occasionally "strayed" into the Park. Chief Ranger John McLaughlin, who served as the archetype for Dorr Yeager's hero Bob Flame, argued that a modern poacher "is nothing more than a sneaking racketeer. Using the latest two-way radio equipment, barricading roads, and making daring automobile chases all helped capture the classic poacher in fiction. While actual pursuits might prove equally dramatic, many times they were less successful.

District Ranger Jack Moomaw recorded one version of a real chase, offering an example of a particularly ambitious effort. Hoping to catch the culprit, he started trailing the fellow's fresh snowshoe tracks.

Along the way he gathered all the illegal traps as well as a couple of ensnared marten. Exhausted by his trek and unable to catch sight of his quarry, McLaren retired to Park headquarters and reported his evidence. Almost immediately his task was continued by rangers Moomaw and Harold Ratcliff. Heading into the mountains on skis, they first went to Fern Lake, thinking that the devious trapper might have broken into Fern Lake Lodge to spend the night.

They were proved wrong.

Regardless, they spent that night at the government cabin nearby. Early the next day they rediscovered the poacher's tracks heading westward, back across the Divide. Cautiously, the two rangers worked their way to the head of Spruce Canyon, climbing a steep pass on crusty snow and ice. Rapidly they began their descent into Tonahutu Creek. Finding shelter among some trees, they built a fire, thawed their canteens, and ate a chilly lunch. During the afternoon that followed, the two men continued on, sometimes floundering in soft snow, crashing through down-timber and brush.

Nightfall came as the rangers trudged on. Finally, in a dilapidated barn at Big Meadows, they found some shelter for the night. Even though they were exhausted and nearly frozen, they managed to build a fire and fix a warm supper.

The Stink of Fear: Chapter 3

Through the frigid night that followed, the two took turns tending their fire and sleeping, trying to avoid freezing to death. When morning came, they skied to Grand Lake Ranger Station. There they met ranger McLaren who had returned by automobile. All their efforts proved fruitless. McLaren announced that the poacher had escaped, "left for parts unknown," leaving the rangers with only a set of traps and a memorable chase. 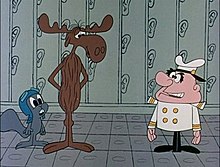 A couple of marten McLaren found in those traps soon graced the Park's museum. Frustrating pursuits of this sort must have angered dedicated men like Ratcliff, Moomaw, and McLaren. As a result, continuous appeals were made for the public to assist in wildlife preservation.

As with their success in attracting more and more tourists, Park Service efforts at protecting wildlife started to look almost too effective. By the end of the s, officials realized that there were more deer and elk living in Rocky Mountain National Park than its natural range could support. With predatory animals almost entirely removed and hunting controlled, the remaining animal population multiplied rapidly.

In , naturalists Merlin Potts and Howard Gregg, along with ranger Harold Ratcliff, counted some deer and elk, and their totals were considered only a part of the actual population. By , the elk in particular had overpopulated their grazing territory. Ratcliff observed: "They can no longer sustain themselves in such numbers without irreparable damage to the range.


Additional "management" to prevent over-browsed feeding grounds and starvation now became necessary. Encouraging hunting on land adjacent to the Park offered a workable solution. So, in , a special hunting season was permitted along the Park's eastern boundary, culling 97 elk from the increasing herd. But not enough animals were eliminated and the problem continued.

By an even more aggressive step had to be taken.

From Wikipedia, the free encyclopedia

Park rangers were forced to shoot some elk and deer. A crisis in overpopulation demanded radical solutions. Throughout the s and early s, numerous studies monitored wildlife populations and their ranges. Park officials hoped to establish a balance between animals and edibles. Live-trapping and transplanting were sometimes substituted for shooting; scientific studies were initiated; wildlife biologists were consulted; officials sought to avoid controversy by basing their decisions upon research.

Shooting hundreds of animals, after all, appeared quite contrary to general national park ideals based on pure protection. Ideals changed to irony as problems grew more complex.